A bus carrying elementary school pupils and parents to a daily excursion overturned on Friday morning near Serres in Norther Greece. Nine children and five accompanying parents were injured. The bus driver claimed that a truck was blocking the road.

The accident occurred short before 10 o’ clock Friday morning near the village Aggista at the 39th kilometer on the national road Serres – Kavala, in northeastern Greece.

The tourist bus was carrying 18 children, 13 parents and 4 teachers to a daily excursion in Porto Lagos in Alexandroupolis. 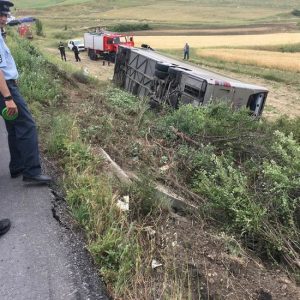 The majority of children managed to get out of the bus by themselves, other had to be evacuated by police and firemen who rushed to the spot.

Police investigates the reason the bus driver lost control of the vehicle.

The bus driver told police he saw a truck cutting his way and had to maneuver to avoid a crash. The truck driver allegedly left the area in high speed after the bus overturned.

However, eyewitnesses do not support the driver’s version.

A teacher in the bus said that the vehicle was moving at a low speed.

Those who were not injured returned to their villages Vamvakofyto and Kamaroto on the second bus taking part in the excursion.

Police is searching for the truck in the area.