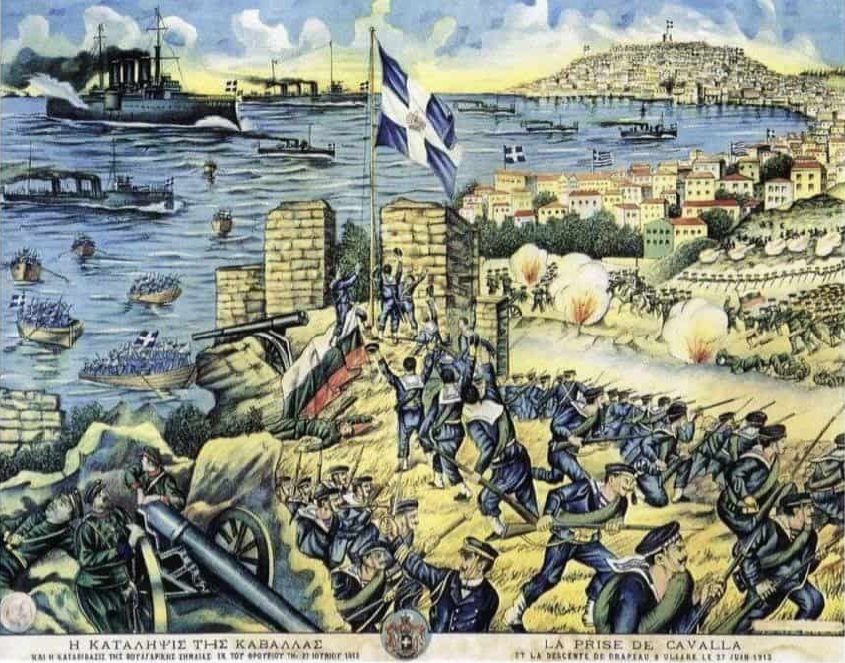 The Liberation Of Kavala

Kavala (Cavalle) is an important seaport in Eastern Macedonia. In antiquity, the city was known as Philippi, named after Philip II of Macedon when he took the town from the Thracians. Philippi was also the place where Paul first preached Christianity in Europe, as well as being the recipient of his letter to the Philippians found in the Christian New Testament.

Kavala became part of the Ottoman Empire in 1387, where it remained for over 500 years. The city became famous for the growing, processing and trading of tobacco. During the First Balkan War (1912-1913), the Balkan League (Serbia, Greece, Bulgaria and Montenegro) fought against the Ottoman Empire and captured most of its European territory. Bulgarian troops captured and occupied the city of Kavala in October 1912, intending to make it a part of Bulgaria.

At the end of the war, captured territories were allotted to the victors, however Bulgaria was dissatisfied with its portion of the lands, especially with Greek and Serbian gains in Macedonia. In June 1913, Bulgaria launched an attack on its former allies, initiating the second Balkan war. The attacks were quickly driven back by the Greek and Serbian armies, and the troops continued on to invade most of the Bulgarian-held territory gained during the war. On June 26, 1913, the Greek fleet lead by the battleship Georgios Averof, commanded by Admiral Pavlos Koundouriotis, entered the Bay of Kavala, capturing the city from the Bulgarians.

Taking advantage of the conflict, the Ottomans advanced into Eastern Thrace, retaking Adrianople. Additionally, the Romanians used the opportunity to invade Bulgaria from the north, advancing to within a short distance of Sofia, the Bulgarian capital. Isolated and surrounded by a more powerful coalition of opponents, Bulgaria was forced to agree to a truce and peace negotiations, which were held in Bucharest, the Romanian capital.

The treaty of Bucharest was signed on August 10, 1913, awarding Kavala (among other territories) to Greeks, and it was immediately annexed into the greater Kingdom of Greece.

Over the coming decades, Kavala changed hands several times, resulting in a tremendous movement and suffering of the local population. Whoever was in power (be it the Greeks or the Bulgarians), would expel the other ethnic group, bringing in people from their own population. In World War 1, the Bulgarians regained the region, but after the war, Kavala and Western Thrace was assigned to Greece. In World War 2, when Greece fell to the Nazi’s, Kavala was again given to the Bulgarians. Near the end of the war, the region was liberated by the Allies, and the city and region were returned to Greece, where it remains today.