Six undocumented migrants, believed to be Iraqis, were killed and more than 10 were injured when the minivan they were travelling in crashed near Kavala on Friday.

Among the dead are three children. Some of the injured are said to be in a critical condition at Kavala General Hospital. 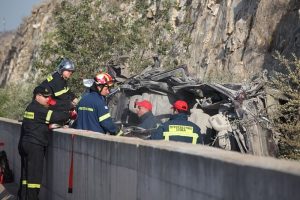 According to reports, the casualties were being smuggled into Greece illegally by a trafficker, who is believed to be among the dead.

The van crashed after careening out of control on the main highway just a few kilometers before Kavala.

Tap Pipeline To Plant 400,000 Trees And Shrubs In Northern Greece