Fourteen provincial airports around Greece now managed by a Fraport-led consortium continue to post higher passenger traffic in the first six months of the year, with the overall increase put at 11.9 percent, compared with the same period of 2016.
Specifically, between January and June 2016, 9.64 million passengers passed through the 14 airports now managed by Fraport Greece. More than half of those passengers, in fact, were recorded in June, the first month of Greece’s tourism “high season”.

June 2017 posted a 16-percent increase in passenger traffic compared to the same month in 2016.

All of the airports, with the exception of Mytilene (Lesvos), posted higher passenger traffic figures. The airport on the latter island, the hardest hit from the refugee/migrant crisis that spilled over from neighboring Turkey in 2015, showed a decrease in passenger traffic by 5.3 percent.

The biggest increases among Fraport’s stable of Greek airports were in jet-setting Mykonos (31.6 percent), followed by the Ionian holiday island of Zakynthos (24.9 percent) and the equally well-known Dodecanese destination Kos (up by 22 percent).

Greece formally completed the transfer of 14 regional airports to a consortium led by Germany’s Fraport AG, in a privatization that was a key element of the country’s bailout program.

The moment the trasnfer was finalized, Fraport Greece raised the fee charges for passengers departing from these airports.

Italians To Walk Ancient Egnatia Road From Thessaloniki To Kavala

FRAPORT Strikes Back, Claims They Found 12,000 Burned Out Bulbs In 14 Regional Airports

Greece’s Natural Gas Network To Expand To 18 Municipalities, Including Kavala 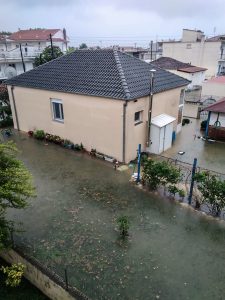